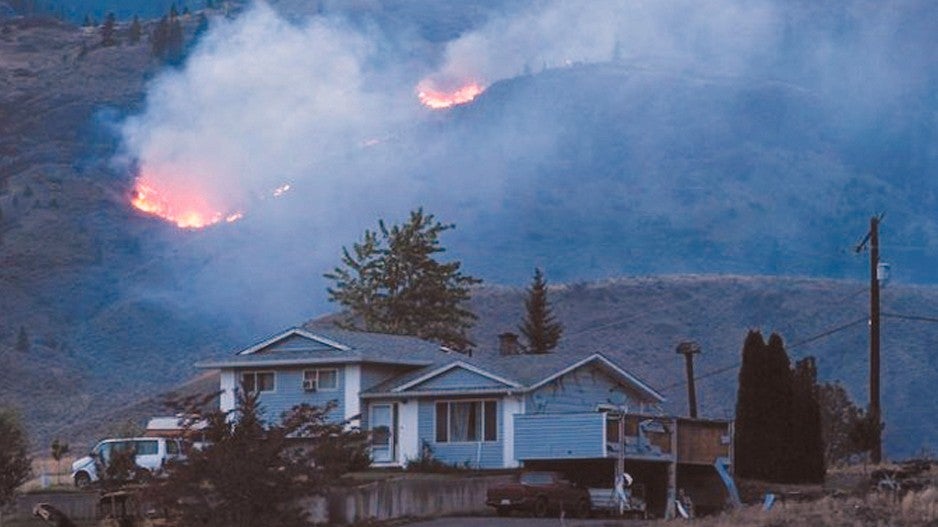 Homebuyers purchasing in B.C.’s Interior where wildfires are raging may find it difficult, if not impossible, to get fire insurance on the home, at least until the smoke dies down,“It is an issue,” said James Palanio, a real estate broker with Royal LePage in Penticton, who said his office recently met with an insurance representative on the issue.
“It is a hard no for insurance for homes in an alert area, an evacuation zone,” he said, but added that fire insurance can be decided “case-by-case” for properties within 25 kilometres of an active wildfire, depending on the insurance provider. “There may be a lake between or other factors.”
Without the insurance, it is impossible to arrange mortgage financing on a home purchase. Palanio said his office is therefore adding a subject clause to its sales contracts related to getting fire insurance.“Any home within 25 kilometres of an active wildfire is uninsurable,” said Emma Fraser, an insurance agent with Underwriters Insurance Ltd. in Penticton, even property that has fire hydrants and a fire department close by. Fraser said that is the strict policy of the insurance firms she represents. She said agencies with their own underwriters may have some case-to-case leeway, but she believes it is not likely.
“I have turned down 30 people trying to get insurance on a home purchase,” she said. “Even people who are selling a home and buying another one are affected. I haven’t written a home insurance policy in the last month.”
Meanwhile, the Insurance Bureau of Canada (IBC) is urging people to get fire insurance and for governments to find ways to reduce risk. “The time has never been more clear that we do need to build more resiliency, and we do need to work together to find a way to reduce or minimize our potential exposure to these threats that we’re facing,” said Rob De Pruis, the IBC’s director of consumer and industry relations. He pointed out there are no easy answers, but said wildfire policy may need a rethink.
When asked about insurance costs for people who live in wildfire zones with no fire department coverage, De Pruis said a lot of factors go into calculating a premium, but added that it’s very unlikely a person would be fully turned down.
“Fire insurance has been around for hundreds of years, and fire insurance is readily available in B.C. and throughout the rest of the country,” he said. But that’s not currently not the case in most of B.C.’s Interior where wildfires remain active. Fraser said the current insurance restrictions are temporary and will end with the fire season, though no one knows when that will be. Added De Pruis: “We need to do better to prepare for wildfires, floods, hail, windstorms. These perils are having just a huge impact on people and property. ”Unfortunately, major natural disasters are becoming all too frequent.Between 1983 and 2008, the Canadian insurance industry was paying out on average of about $425 million annually for severe weather costs. Over the past decade, the number has increased 360% to almost $2 billion a year. Six out of the 10 costliest events in Canadian history have been in the last decade.
Article Courtesy of  Frank O'Brien | August 17, 2021 Prince George Citizen